I didn’t grow up watching hockey like my husband did, so technically it isn’t in my blood. However now that I have been with my husband for some 10 years, I have been subjected to the sport so much that now I do enjoy watching the game. If my boys end up playing hockey in Minnesota some day, I have been told I will end up the “hockey mom”. Who knows, maybe they will both be Gophers some day. 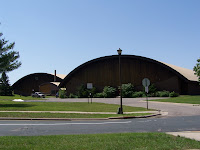 Well this week the honor of being the top ice arena in the state went to our beloved Burnsville, just south of Minneapolis. The Burnsville Ice Center received the James Padgett Award which recognizes the constant improvement of ice delivery. The ice arenas recent updates to the concession stand, ice surfacer, etc helped it win the award. Another interesting reason Burnsville won was their dedication to growing Adult Hockey, a sport that is quickly becoming more popular every year. My brother-in-law already plays on a team in Chicago, and my husband hopes to get onto a team sometime next year.

Just to show you non-hockey states how popular the ice is in Burnsville, there are two buildings (pictured above), each with its own sheet of ice. This complex alone attracts over 350,000 visitors each year and has hockey, figure skating, learn to skate programs, youth and adult hockey, and curling. And yes, you can skate on the ice during the summer months!