One great feature that Minneapolis has is the relatively new light rail line that was completed in 2004. At a cost of $715 Million, it allows local residents and tourists to travel 12 miles.
The line begins in downtown Minneapolis Warehouse District and ends at the Mall of America in Bloomington, MN. Other stops along the way include Fort Snelling, Minnehaha Park, the Minneapolis-St Paul Airport, and the Metrodome. It is a great way for locals to catch a ride and avoid traffic at the same time. Each station has an automated machine where tickets can be purchased and run times are any where from 8 minutes to 30 minutes, depending on what time of day it is. Due to the diverse culture in the Twin Cities, tickets can be purchased in English, Somali, Hmong, or Spanish. The cars run up to 55 miles per hour so your ride can go by very quickly. They are powered by electricity from wires that hang 16 feet above the line. 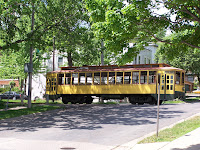 What some don’t know is that this is not the first transportation system Minneapolis has ever seen. From the late 1800’s t0 the 1950’s, there was an extensive network of streetcars throughout Minneapolis and St Paul. As buses became more prevalent and costs to maintain the aging streetcars increased, the cars were no longer needed. In fact, all but two of the Minneapolis streetcars were burned in 1954, the only way the city saw to get rid of them. (The photo on the right is one of the renovated ones still in use.)
There is a planned extention of the light rail system north of Minneapolis, ending in Big Lake, and also an additional stop in Bloomington. If the project works out, it is expected to be completed in 2009.