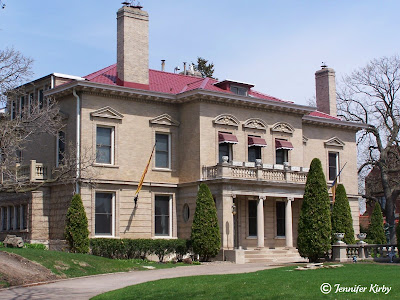 This weeks featured Historic Home of Minneapolis is located at 1300 Mount Curve Avenue.

Known as the Charles Martin house, the home was built in 1904 by William Channing Whitney and is mostly constructed of brick. When driving down Mount Curve, you could easily miss the home as it is tucked away behind a wrought-iron fence and large hedge. I had to angle the camera to get a good shot of the home.

The Twin Cities was founded on the backs of the flour mills. The original owner of the home was involved in the trade as the Secretary and Treasurer of the Washburn Crosby Company that later became General Mills. The home as sits on top of Lowry hill, looking down over Minneapolis. The view has changed greatly since its construction.

Built in the Italian Renaissance style, it has every thing needed to stand out as an fabulous form of architecture. The low pitched hip roof covered in tiles is one give away, but other classical details include the balustrade front porch, pediments over the windows, the brackets, dentils, and quoins, just to name a few. Also it seems that many columns on Renaissance homes are done in the Doric fashion.