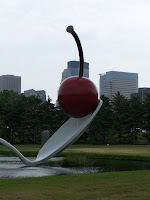 Since moving to Minnesota, Saint Paul has a special place in my heart. It is a bustling big city, with a small town feel, and any city that can hold on to its “roots” is truly a Midwestern gem. Minneapolis on the other hand is trying to be something that it may never become, another Chicago, and in the process, I wonder if it will lose itself.
Take for instance, Indianapolis, a city I grew up near. Over my lifetime, I have watched the city go from a poor struggling town trying to prove itself in the nation as a city worthy of visitors, to a wonderful hip metropolis that, in my opinion, ranks up with some of the best for available amenities. The best thing I like is that it still has the “home town” feel that welcomes me home every time I visit. I would rather go to Indy than Los Angeles anytime of day.
So when I picked up the MPLS-ST Paul Magazine that arrived at my door today, I was a little angered by a Letter to the Editor regarding the design of the I-35W bridge. The writer pretty much says that by Larry Millett commenting how the bridge should not be used as a memorial, that he is showing “small town thinking and is why Saint Paul will forever be the smaller of our Twin Cities”. He also goes on to say that Minneapolis should take advantage of the bridge collapse by building a memorial to the victims and designing something that will “make an architectural statement worthy of world recognition”.
First of all, don’t get me started on his comment that it still isn’t “too expensive” to get a better design. But his comment about Saint Paul just wasn’t warranted. Just because people are of the opinion that we don’t need to make this new bridge into a memorial, there is no need to attack them and call them “small town”. I for one agree with Larry Millet…this is not the time or place for a bridge memorial. If you want to put a plaque at the end of each bridge, be my guest, but don’t “design” the bridge, using tax payers dollars, as a grand memorial. Trying to get world recognition off the deaths of a few people is just vain, and Minneapolis should know better.
Some people in Minneapolis, really need to get over themselves. Just because you are the bigger city, doesn’t really mean you are the better one. When I think of the area, I really think of the cities as one. Each has something the other doesn’t. Maybe I see it this way because I have a fresh perspective on the Twin Cites, and haven’t been corrupted to one or the other since I am not a native. Of course, when you are a real estate agent, you can’t really cheer for either one. But when I hear comments from citizens like I describe, it makes me want to jump ship and go over the river to the other side.