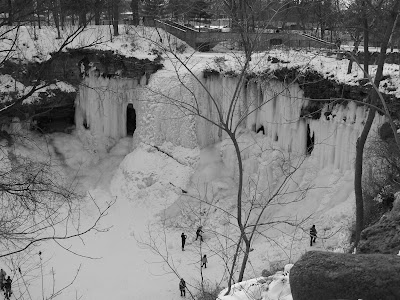 Minnehaha Falls In Winter
Minnehaha Falls is a beautiful area to visit anytime of the year in Minneapolis. This weekend I went to the park to get some snapshots of the frozen waterfall. Yes, those are people walking at the bottom of the falls. At 53 feet, it is quite a sight to see in summer and in the winter.
History
Minnehaha Creek flows 22 miles from Lake Minnetonka through Minneapolis before ending its journey at the Mississippi River. The word, Minnehaha, comes from the Dakota language and literally means, “curling water“, or “waterfall“. Minnehaha Falls is located not too far from where the creek meets the Mississippi. History has it that the falls were named “Brown’s Falls” in the early 1800’s after United States Army Commander Jacob Brown, while the Dakota called Minnehaha Creek, “Wakpa Cistinna“, meaning “Little River“.
Minnehaha Falls is quite famous. It is the site location for Henry Wadsworth Longfellow’s poem, “The Song of Hiawatha”, published in 1855.
As far as the geology of the site, the site of Minnehaha Falls is linked to Saint Anthony Falls, which is several miles upriver on the Mississippi. Around 10,000 years ago, St. Anthony Falls was located near the site where Minnehaha Creek entered the river. As erosion brought the falls upriver, it passed Minnehaha Creek, causing a new waterfall to form. The story actually becomes even more complex because the Mississippi eventually abandoned the portion of St. Anthony Falls that was then nearest to Minnehaha. The lower portion of Minnehaha Creek now flows through a wide and deep channel once belonging to the larger river. The end of Minnehaha Creek where it joins the Mississippi River is the lowest surface point in the city of Minneapolis at 686 ft above sea level. Below is a photo of the river valley gorge. 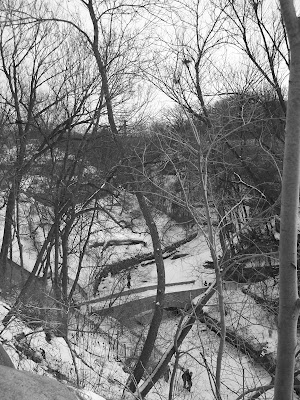 Photos of the falls have been taken over the years, 1860, 1865. Below is a slide show of the other photos I took of the frozen falls.