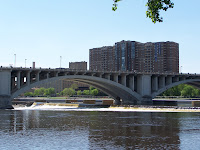 Approximately 10,000 years old, St. Anthony Falls must have been a wonder to see before any of us were here. The glacial River Warren helped to create the falls, with time and natural erosion moving the falls up river until it landed on a limestone base. It is estimated that the waterfall originally fell 180 feet into the river below.
In 1680, Father Louis Hennepin was the first white man to see the natural falls and decided on giving it the name St. Anthony. However he wasn’t the first to name the waterfalls. The local Indian population gave religious significance to the area, calling it MI-NI RORA (curling water) by the Dakota and Kakabikah (the severed rock) by the Ojibwa. At this time, Father Hennepin described the falls to be a height of 60 feet, about half the original perceived height. Below is the first known drawing of the falls by Jonathan Carver, as published in his book in 1778. He estimated the height of the falls was 30 feet and described the presence of six islands beside the waterfall.

By the 1800’s St. Anthony Falls was viewed both as a natural wonder and a power source. With industry now setting in, the falls dwindled down to a 16-20 foot limestone wall into the only gorge on the Mississippi River for the next 2500 miles. Wild rapids dotted the area, but sadly they can no longer be seen. Mills and flour plants were constructed along side the river, and the logging industry fished their timber down the river and over the falls. Of course all this use slowly eroded the natural landscape of the falls even further and caused a lot of damage.
In 1869, St. Anthony Falls was dealt another blow. When local business men acquired Nicollet Island, they began excavating a tunnel through the sandstone near the waterfall. Digging into the falls weakened it causing the falls to break through the limestone bed and into the tunnel. Despite attempts at repairing the damaged areas, St Anthony Falls continued to deteriorate.
It wasn’t until the late 1930’s that the Army Corp of Engineers came in and began repairing the area with stone aprons. St. Anthony Falls was the limit of upper Mississippi river navigation until the Corp began building a lock and dam system between 1948-1962. Now known as Upper St Anthony Falls (seen in aerial photo above) and Lower St Anthony Falls, the once natural wonder is a system of two hydro-electrical dams, with a “tiny” falls for our viewing pleasure. Below is a diagram of the recession of the falls between 1680-1887, as drawn by the US Army Crop of Engineers. 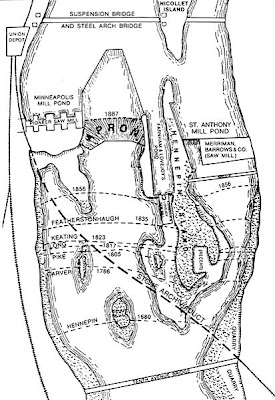 Without the rise of industry centered around St Anthony Falls and the Mississippi River, Minneapolis would not have grown into the city it is today. Because of the historical significance of the area, St. Anthony Falls was added to the National Registry of Historic Places and developed into the St. Anthony Falls Historic District in 1971. It is now a tourist attraction that can be seen well from Nicollet Island the the Stone Arch Bridge.
While it may not be as grand as it was before we arrived, at least now there is a historic conscious that keeps the falls alive for future generations to enjoy. Make sure to visit the area in the summer…it is a beautiful landscape set off downtown Minneapolis.