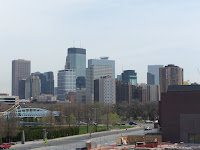 Ok, well I am sure St Paul is not too jealous, but Minneapolis was recently ranked in the top 5 cities worldwide for cleanliness. According to Forbes magazine who released the findings, “The study looked at more than 300 cities from around the world in terms of health and sanitation, including factors like pollution, water quality, waste removal, and availability of hospital and medical supplies.” Minneapolis came in 5th place behind Calgary, Honolulu, Helsinki, and Ottawa.

Minneapolis is well known as one of the most environmentally conscious cities in the nation. I even believe a new bill passed recently that requires all future buildings constructed in the city to be “Green”. Minneapolis also just released the Minneapolis Green Print which speaks about the efforts the city has been making to protect the local environment. Visit the cities website to learn more.