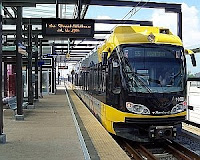 There has been a battle brewing the last few weeks on whether the local metro counties would approve an increase in the state sales tax by 25 cents. The additional funds would go to development of new rail lines and bus transitways.

This week, the final three counties voted, and approved to increase the sales tax up to 6.75%. That makes Minnesota, the six highest taxed state for sales taxes. I have a problem with an increases in taxes, as some of you might gather, and two problems I have with this recent vote include:

According to the Star Tribune, “Supporters said the agreement will make the Twin Cities more competitive with Denver, Portland and other areas with similar taxes, which gives them a source of funds to match federal transportation dollars that in some cases could pay for half the project cost.” Umm…keeping up with the Joneses, last time I checked, was not a valid reason for increasing taxes.