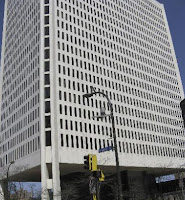 I ran across a funny read from the Star Tribune about ugly buildings in downtown. The writers drove around to see what they could find for terrible facades and design. I have to say, I agree with them, I really loath late 60s building design, not to mention most buildings from the 70s. Not an ounce of inspiration in them.

The building shown in the photo is at 100 Washington Square, which gets a great critique by Rick and Claude:

“A big thanks to City Hall for issuing the building permit for that monster. The best thing about owning an RW condo is you can’t see the outside when you’re inside. And don’t look now, but there’s 100 Washington Square, Minoru Yamasaki’s blow-up of a 1970s computer punch card, in a blinding shade known down at Hirshfield’s as Crest Whitestrips. On stilts, no less, with a skyway snaking under it like a mirrored python. Then there’s the Metrodome. Oh well. Why kick a dog — literally — when it’s down?”

Of course, with all the modern design going on right now, I have to wonder if in 20 years, we will be asking the same question “what were they thinking?”.