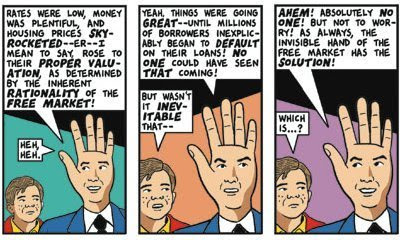 Today Inman News Blog posted about a group of ACORN protesters demanding for the mortgage industry to save their homes. Apparently there are some home owners out there that didn’t know what they were doing when the refinanced their mortgage. There are even some who took out huge amounts of equity from their home, and put it into paying off credit card debt, college debt, etc. Now they find themselves in a pickle when the current value of their home is less than what they refinanced for.

Does this mean that all refinances in the last four years were presented by predatory lenders? No. Does it mean that there are some people out there that are being foreclosed on because they made a poor judgement? Yes. Is it the government’s responsibility to bail everyone out that made a bad decision? No…but they will anyway.

The point is, the foreclosure debacle was inevitable. We just moved, and I haven’t unpacked my crystal ball yet to see where this is all going in the next couple of years, but I do remember consulting it in 2004. It was SO obvious that buyers were going to get in trouble when their ARM loans reset, and it is really hard for me to believe that no one else saw it coming.

That year I worked with many first time home buyers who normally would not have been able to obtain a loan. When they came to me with financing that included an ARM, I personally called the lender and told them to find a different loan, or lose this client. I then sat down and explained what was going to happen in three years to them financially, when their rates increased. Most were amazed and had no idea. They quickly understood that an ARM was the worst thing for them to consider. I often used the analogy of a nice shiny apple: it looks yummy from the outside, but cut if open and you will find it rotten to the core. First appearances can be deceiving, so it is best to dig deep into the details to fully understand the structure of the loan.

So here we are, and my crystal ball correctly predicted the fallout we are now in. Home owners throughout the nation are scrambling to save their homes. The government is intervening, but for some it is too late. Oh, wait…I just found my crystal ball. It is a little dusty, but I think it is saying that the government is going to get TOO involved, it is going to pass some stupid laws that enforce more regulations on the mortgage industry that are going to actually hurt home owners (which won’t be realized for ten years), and their “intervention” is going to cause interest rates to climb.

An interesting tidbit is the fact that for years banks have been lobbying the government to let them brokerage real estate. Well, here is the chance to prove their worth and ability to run a good real estate business. Unfortunately, they are not doing so well as it appears banks are having a hard time keeping up with the shear volume of foreclosures. Homeowners and real estate agents are calling banks before foreclosure and trying to work out deals in which the bank will except a short sale, change the rate, or change the loan terms. However there are banks out there, like Countrywide, who are making it nearly impossible for homeowners to find some relief. Not to good of a report card for me to approve banks getting into real estate.