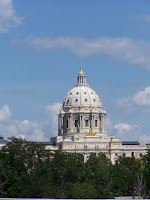 I just read an interesting article which predicts the next 15 companies that could likely fail in 2009. While some of them are no big surprise, like Chrysler, who should have failed decades ago, or Blockbuster, who has been struggling ever since online video rentals have taken off (I am an avid Netflix fan), some are rather surprising.

Well, OK. Krispy Kreme is really not that surprising. They over expanded in the United States and stretched themselves too thin. Sometimes, staying small is the best plan for long term survival. But one that I was surprised to see is Realogy, the largest real estate brokerage in the country:
“Realogy Corp. (Privately owned; about 13,000 employees). It’s the biggest real-estate brokerage firm in the country, but that’s a bad thing when there are double-digit declines in both sales and prices, as there were in 2009. Realogy, which includes the Coldwell Banker, ERA, and Sotheby’s franchises, also carries a high debt load, dating to its purchase by the Apollo Group in 2007 – the very moment when the housing market was starting to invert from a soaring ride into a sickening nosedive. Realogy has been trying to refinance much of its debt, prompting lawsuits. One deal was denied by a judge in December, reducing the firm’s already tight wiggle room.”
It will be no surprise to me if some real estate brokerages go out of business in 2009 and 2010. Many just over expanded and overspent during the fat years, and left nothing for the lean years. I believe that the local Realtor association has said about 15% of the agents in town have left the business.
The funny thing about this, to me at least, is it seems many people and businesses should have reread the Biblical story of Joseph. See Joseph could interpret dreams and when Pharaoh had one he couldn’t decipher, Joseph came to the rescue and predicted that Egypt would see 7 years of famine after 7 years of feast. Their solution? Put some food aside during the seven years of plenty, so they would not suffer from hunger during the famine. Hmmm…there’s a novel idea.
But so many businesses, including our local governments, saw the money flooding in and decided to build larger buildings, expand, grow, grow, grow, and were so blinded by the wealth they violated history, and are now paying for it. Cities in Minnesota are right now debating on whether to cut school funding and after school programs…because they are facing a budget deficit. You’ve got to be kidding me. I don’t see them proposing to cut a few of those high paying government jobs.
Please, can someone answer how governments survived 5+ years ago, before the boom, on a budget, but cannot do it today?